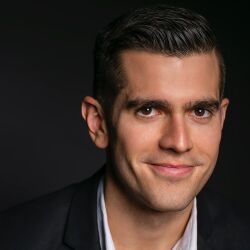 Lontano: Symphony for Wind Band was commissioned by Mallory Thompson and the Northwestern University Symphonic Wind Ensemble in honor of Thompson's 20th anniversary as director of bands at Northwestern. In writing it, Martin said he wanted to create something "huge in scale and meaningful, not just for Mallory and the current Symphonic Wind Ensemble, but all past and future ensemble members," who forever connect the past to the future, and ground the future in the past.

The word lontano is an Italian term, used in music to suggest something heard from a distance. The work is in three movements, beginning with In the Void, Alone, and progressing through the middle Interlude: Spiral movement to the final triumphant Horizons, which Martin said at the work's May 22, 2016, world premiere, was "a celebration of our community."

"The piece itself IS a journey, travelling from the depths of loneliness to the heights of joy," Martin wrote in his website blog. "It's about traveling through the vastness and the blackness of space to arrive at a beautiful horizon."

Lontano is an Italian word meaning “at or from a great distance,” often used in a musical context to describe something intended to be played extremely quietly or very distantly offstage. In the case of this piece, the title is certainly representative of the use of both musical devices, but is intended more to describe a musical range and scope in a context that is subjective to the listener. While the published narrative of the piece may be slightly cryptic (if a bit simplistic), it is my hope that the listener is able to simply enjoy what they hear; the music perhaps inspiring something more personal for each person than what I imagined. That being said, there is a somewhat specific journey the music is intended to illustrate, and in the spirit of trying to create something special and personal for the commissioner of this piece, Mallory Thompson, Director of Bands at Northwestern University, it is worth it to me for you to be at least peripherally aware of where we start, where we end, and how we get there.

When we first discussed the piece in 2013 in anticipation of her 20th year at Northwestern, Mallory requested that it in some way honor and represent both her relationship with all of her Symphonic Wind Ensemble (“SWE”) students of the past 20 years and also her connection to one of her greatest mentors, the late Vincent Cichowicz. “Vince” is a powerful voice not only in the history of Northwestern, where he was the professor of trumpet spanning three decades and mentor to hundreds of aspiring brass players, but also in the world of brass playing from his years as 2nd Trumpet in the Chicago Symphony. Vince transformed the lives of countless musicians, not just trumpet players, with his singing and fluid approach to playing a brass instrument. Mallory studied trumpet with Vince during her time as a student at Northwestern, and in her words, Vince “forever impacted the way I thought about music, performed music, and eventually how I taught and conducted it. In some way, however small or large, everything I have to give in a rehearsal or a concert found its origins in something I learned from Vince. He’s there with me everyday, and by extension, with whatever group I am in front of.”

Musically speaking, Vince is there throughout the symphony as well (F, E, F, G, F, D); his theme opens the first movement in the clarinets and piano, then is expanded and inverted in solo bassoons, laying the tonal foundation for the entire symphony. It returns here and there, always present in some way. The same theme brings the symphony to a close in the final phrase of the last movement, in unison brasses.

As anyone who knows me might expect, there is some theatricality involved in this symphony: offstage brass and percussion, extra players, and a narrative that asks you to suspend disbelief for a moment and open yourself to the complex depths of grief, catharsis, and inevitably the heights of triumph. The movement titles, and individual “chapters” listed within the first movement, are intended to depict a somewhat visceral and narrative representation of grief, whose process is at once unique and common to us all. The analogy is that of floating through complete blackness, becoming immersed in a massive orb of light, being flung violently back into the dark, spiraling out of control, and eventually arriving at a collection of the most beautiful horizons we could imagine. Indeed, the grieving process is a long one, the destination of which always seems to be just out of reach; always a great distance away. I have specific thoughts in mind for what every measure of this music means to me. I would prefer not to impose those thoughts on you, the listener, (also for whom this was written), but for you to experience the piece as you are, at whatever stop in your journey brought you to this concert. My sincerest thanks to Mallory, Jerry, Northwestern University, and The University of Texas for bringing this symphony to life.

For Mallory and the Northwestern University Symphonic Wind Ensemble.