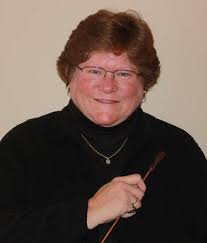 Lisa Galvin (b. 1961, Ohio) is an American composer and educator.

Ms. Galvin spent 31 years teaching elementary, middle school, high school and college band students in Ohio. Upon retirement from the Reynoldsburg and Hilliard City School districts, she began her compositional career following many years of arranging for other ensembles.

Lisa’s interest in music arranging and composition has steered her toward an active career of producing all types of music. She was asked to join the arranging staff of The Ohio State University Marching Band in 2008, and her music has been featured in several bowl game appearances and popular halftime videos by the famed marching band. Mrs. Galvin also enjoys writing solo, ensemble and large group works for a number of middle school and high school band programs, and she has served as a guest conductor and clinician for many bands across the state of Ohio. In 2009, Mrs. Galvin was asked to join the band staff of the newly opened Hilliard Bradley High School in Hilliard, Ohio, where she was privileged to have two original compositions chosen as the school’s alma mater and fight song We Are Bradley. She has been commissioned for numerous compositions, and in 2012 she was honored to have one of her original works premiered at the International Women’s Brass Conference.

Ms. Galvin also served as an adjunct lecturer in music technology at Capital University and The Ohio State University, where she taught graduate and undergraduate courses in Finale© and SmartMusic© software. Additionally, she has served the Ohio Music Education Association in a number of capacities. Most recently, she and her husband served as the co-chairs of the 2013 State Professional Development Conference in Columbus, Ohio.

In 2014, Lisa was asked to join the staff of The Ohio State University Marching Band as interim associate director. She is a founding member of the Brass Band of Columbus, where she has maintained the principal horn chair for the past 33 years. She is also a founding member and principal horn with the Athena Brass Band, comprised of women brass band professionals from across the United States.