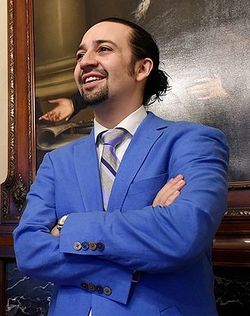 Lin-Manuel Miranda (b. 16 January 1980, Washington Heights, N.Y.) is an American composer, playwright, actor and singer, best known for creating and starring in the Broadway musicals Hamilton and In the Heights.

Miranda grew up in the Latino neighborhood of Inwood, New York, but he spent a month every year in his grandparents' home town, Vega Alta, in Puerto Rico. He is of mostly Puerto Rican descent. The name Lin-Manuel was inspired by a poem about the Vietnam War, Nana Roja Para Mi Hijo Lin Manuel, by the Puerto Rican writer José Manuel Torres Santiago.

Miranda's work In the Heights, begun at Wesleyan, opened on Broadway in 2008, where it won four Tony Awards.

In 2008, while on vacation, Miranda read Ron Chernow's biography of Alexander Hamilton and, inspired by the book, wrote a rap about Hamilton that he performed for the White House Evening of Poetry, Music, and the Spoken Word, on May 12, 2009. By 2012, Miranda was performing an extended set of pieces, based on the life of Hamilton, referred to as the Hamilton Mixtape. Hamilton, a musical based on the Hamilton Mixtape, officially opened on Broadway August 6, 2015, earning rave reviews. Miranda wrote the book and score and starred as the title character.

From 2014 to 2016, Miranda collaborated with Opetaia Foa'i and Mark Mancina to write the music for Moana.