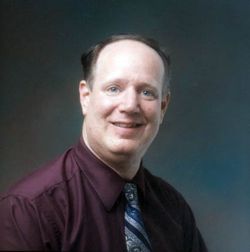 Leslie J. Deutsch (b. 1956) is an American mathematician and musician.

Dr. Deutsch received his Ph.D. in mathematics from Caltech in 1980, the same year he came to the Jet Propulsion Laboratory. Dr. Deutsch developed techniques for communicating with the Voyager 2 spacecraft at Neptune and Uranus. He also developed microelectronics to enable more advanced communications systems to be placed on newer spacecraft. Dr. Deutsch received the IEEE Judith Resnick Medal in 1991 “for contributions to the theory and practice of deep-space telecommunications and information processing. In 1995, Dr. Deutsch co-led the team that redesigned the Galileo mission to Jupiter after the spacecraft’s high-gain antenna failed to deploy. For this work, he received the NASA Outstanding Leadership Medal in 1996. This work led eventually to a meeting between Dr. Deutsch and Pope John Paul II at the Vatican in 1997. Dr. Deutsch served as manager of NASA’s Deep Space Systems Technology program, sometimes called the “X2000 Program.” This program is responsible for developing the next several generations of spacecraft for exploring the solar system and beyond. Currently, Dr. Deutsch manages JPL’s Technology Program Integration Office and is responsible for developing the Laboratories strategy for overall technology investment. Dr. Deutsch holds 28 patents in the fields of communication and electronic music. He has written more than 40 technical papers in communications, microelectronics, space systems, and ground station design.

Dr. Deutsch spends his spare time working as a professional musician and composer. He has given organ recitals in Europe and Japan and has served as Caltech’s organist since 1973. He performs with several jazz bands and has traveled extensively in North America and Europe playing the piano, trumpet, and tuba.