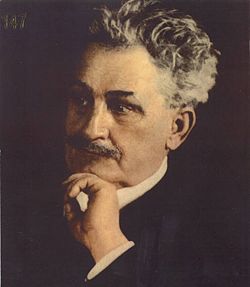 Leoš Janáček (1854-1928) was born in Hukvlady in Moravia (Czech Republic) in 1854. Janáček was inspired by Czech, Slavic and Moravian folk music. It was from these roots that he created his original musical style including his “speech” – derived melodic lines, and complex modal language. His principle vocation was that of teaching, having founded music schools and conservatories in his homeland, particularly in Brno. A patriot, his early works were not widely accepted; however, his most fruitful years were from the age of seventy onward.

Janáček is now regarded as a Czech composer to be ranked with Smetana and Dvorak, as well as one of the most substantial and original opera composers of the 20th century. His prose, like his music, is in abrupt, short phrases, often too compressed and overloaded to reveal its meaning immediately, but with unmistakeable energy and force.

His most celebrated musical compositions include the symphonic poem Sinfonietta, the Glagolitic Mass, Taras Bulba and Lachian Dances, as well as his string quartets and operas.