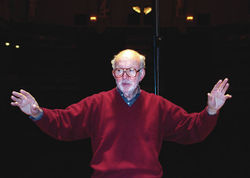 Niehaus studied at the University of California, Los Angeles, where he received a Bachelor of Arts degree. In 1952, he joined the Stan Kenton Orchestra, with whom (except for a two-year tour of duty in the U.S. Army) he performed and recorded until 1960. He won Downbeat magazine’s New Star - Alto Sax Award in 1955. Concurrently, he wrote and recorded his own albums. He contributed many compositions and arrangements to the Kenton library.

In addition to his commercial compositions and arrangements, he has been active as a clinician, performer, and adjudicator. He has written many arrangements for band, orchestra, and jazz ensemble, along with several pedagogical works for saxophone.