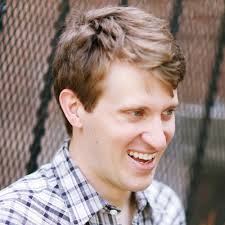 Beecher was born to Estonian and American parents and grew up under the redwoods in Santa Cruz, California, a few miles from the wild Pacific. Since then he has lived in Boston, Houston, Ann Arbor, Berlin, New York and Philadelphia, earning degrees from Harvard, Rice and the University of Michigan. This varied background has made him particularly sensitive to place, ecology, memory, and the multitude of ways in which people tell stories. Lembit’s primary teachers have included Evan Chambers, Bright Sheng, Karim Al-Zand, Pierre Jalbert, Kurt Stallmann and Bernard Rands. He has served as Visiting Assistant Professor of Music at Denison University, held residencies at the Copland House and Scrag Mountain Music, and has accompanied movement classes at the Joffrey Ballet in New York as well as in studios in San Francisco and Santa Cruz.

In 2011 Lembit was appointed to a three-year term as the inaugural composer-in-residence of Opera Philadelphia in collaboration with Gotham Chamber Opera and Music Theatre Group of New York. Gotham Chamber Opera’s premiere of I Have No Stories To Tell You at the Metropolitan Museum of Art was dubbed an “ingenious project” by The Wall Street Journal.

Drawing on family stories about Estonia and the immigrant experience, Lembit wrote And Then I Remember, a documentary oratorio based on interviews with his grandmother. Completed while a fellow at the University of Michigan Institute for the Humanities, And Then I Remember won the Opera Vista Competition for new opera, and has been produced as a concert piece, semi-staged oratorio and fully staged opera in Ann Arbor, Houston, New York and San Francisco.

Lembit’s recent focus on vocal writing and dramatic works has led to collaborations with Cantori New York, Gotham Chamber Opera, Opera Philadelphia, Tapestry New Opera, and mezzo-soprano Laura Mercado-Wright. In addition, his music has been performed at numerous festivals, including Tanglewood, Aspen, Cabrillo and New Music on The Point, among others. He has received awards and grants from the Detroit Chamber Winds and Strings, American Music Center, Meet The Composer, New Music USA, ASCAP, and NewMusic@ECU.

A committed collaborator, Lembit has worked on projects with vocalist Bobby McFerrin, choreographer Elizabeth Bergmann, artist/film-maker Kevork Mourad, and the puppeteering group An Exciting Event. An advocate for Estonian contemporary music, Lembit is also active as a pianist and concert producer.