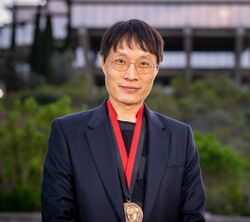 Liang Lei (b. 28 November 1972, China) is Chinese composer living in the United States.

He received his bachelor's and master's degrees from the New England Conservatory of Music in Boston, Mass., and his Ph.D. from Harvard University. He is currently the "President's Distinguished Professor" and doctoral supervisor of the University of California, San Diego, and has served as the dean of the music department and the dean of composition.

Liang Lei has won many important world awards in recent years, including the "Rome Award" from the American Academy of Rome, the Guggenheim Award, the Sergey Kusavitzki Music Fund Award, the National Art Foundation Award, and the New York Creation Fund Award , And the Liebersson Prize awarded by the American Academy of Arts and Letters. His saxophone and symphony orchestra work Xiaoxiang was nominated for the 2015 Pulitzer Prize for Composition. In 2021, his symphony orchestra work Thousands of Mountains and Waters won the highest international composition award-the Gervin Meyer Award.

From 2013 to 2016, Liang Lei was hired by the California Qualcomm Institute as a resident composer. His Huang Binhong landscape album multimedia research project protects and reconstructs precious cultural heritage by studying music and advanced science and technology. In 2018, Lei Liang was named the first research artist by Qualcomm Research Institute. Liang Lei’s recent operas dealt with the issue of sex slaves on the US-Mexico border and the complicated relationship between guns and violence in the United States. At the same time, he is collaborating with scientists from the Institute of Oceanography to lead the music team to participate in environmental protection through the study of coral reef sound. Liang Lei was hired as a Young Fellow of the Harvard University Fellows Association and was named "Young Global Leader" by the World Economic Forum.