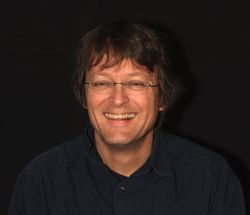 Leander Kaiser (b. 1961, Stuttgart, Germany) is a German composer and percussionist.

Leander Kaiser studied with different well-named professors of percussion. From 1986 to 1988, he taught percussion at the University of Cologne. Since 1988 he teaches at the Musikschule Starnberg.

In 1990, he began composing for percussion. Since then, more than 40 of his compositions have been published. In 1997, he won the first prize of the 24th Composition Contest of the Percussive Arts Society-USA with his work Black Sphinx for Marimba Solo. In July 1999 he won the first prize of the "3° International Challenge for Creative Percussionists" at Percfest in Laigueglia, Italy. For this contest, he exclusively played his own works. He played at two PAS Euro Meetings, 1999 in Tübingen, Germany and 2001 in Sofia, Bulgaria. He and his ensemble INDEX4 played at two World Drum Festivals as well, 1999/2000 in Hamburg, Germany.