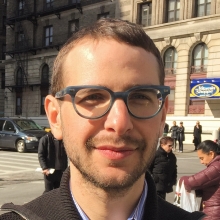 Leaf Metal was commissioned by and is dedicated with admiration to friend and conductor Eric Hewitt and the Boston Conservatory Wind Ensemble. I have long admired Eric, who champions composers with unparalleled energy, helping to create exciting new repertoire for wind ensemble (and other ensembles).

When I first began discussing the work with Eric, I knew immediately that I wanted to write something “oceanic,” that I would use the whole ensemble like a vast organism. Fleeting soloistic creatures emerge briefly, but are quickly subsumed by the overall sound-mass which flows through a variety of episodes. The title, meant as a poetic suggestion, brings together the natural and the industrial, the decorative and the solid. There are other associations in the work as well: amplified, microtonal harps help create detuned textures which live alongside brassy chords that evoke distorted “big band.” I don’t consider the work to be postmodern, though; rather, these fleeting associations are transient figures that arise from and return into the ocean of sound that carries the work.