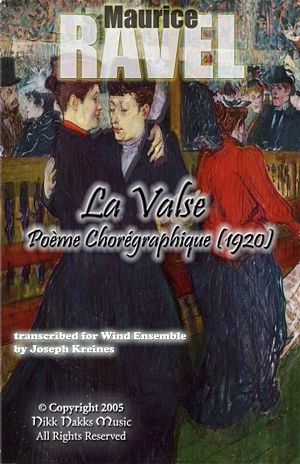 In a letter written in 1906, Ravel spoke of plans to compose a waltz that would pay tribute to Johann Strauss and be “an apotheosis of the Viennese waltz.” He titled his rough sketch Wien: Poème Symphonique (Vienna: Symphonic Poem). By 1920, the work had evolved to its finished form and its final title: La Valse: poème chorégraphique. This is no typical waltz; it is a surreal parody, an apocalyptic view of wartime Vienna, familiar to Ravel through his service as an ambulance driver during World War I.

In Ravel's version we are meant to see, as through a mist, an imperial palace of the mid-19th century, a grand ballroom filled with dancers, a scene alive with light and colour, an “impression of a fantastic and fatal whirling.” It is a waltz with one foot planted solidly in classical waltz traditions, with the other balanced uncertainly on the shaky ground of the new, the avant-garde, the modern. Rarely performed as a ballet, it is often programmed as a concert work, the absence of visual “busyness” helping to free the palette of the mind’s eye to imagine the surrealism of Ravel’s vision.

Ravel dedicated his waltz to his long-time friend Misia Sert, a woman who was held in high esteem by many influential personalities of the day. It was in her home that Ravel first performed a piano reduction of the work for Sergei Diaghilev, Igor Stravinsky, and Francis Poulenc.