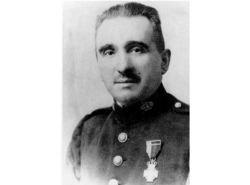 This work bears the English translation of title, "The Ear of Gold."

This paso doble torero (bullfighter two-step) has the fanfares, trumpet solo, and ornamentation expected in the music for Spain’s most popular sport, regarded as a test of bravery, skill, and grace by the Spanish populace. After the banderilleros have driven their darts into the bull and the matador has made his kill, one of his most prized possible awards (dependent upon the opinion of the judges -- and the spectators) is the ear of the bull. During the drama the band also plays an important part since it is permitted to play only when the presiding officer believes that the torero is performing exceedingly well. Regardless of how the award appears to the first-time visitor to the bullfight arena, it is indeed an “ear of gold” to the matador.

Mariano San Miguel was a Spanish organist, organ maker and composer. In his later years he was the conductor of an important military band. His "symphonic" pasodoble La Oreja de Oro (The Golden Ear) is a classic adaptation of that popular dance to an extended and developed work in this form for the repertory of the band. By definition the pasodoble is a double-step, but it is known in social dancing as a one-step which became popular in the early 1920s. San Miguel calls his a "pasodoble torero," and while its spirit does not always invoke the excitement of the crowd at a bull ring on a bright sunny afternoon, there are flashes of that awesome duel between man and animal. And there is, as well, a reflective character in the music provided by the cadenza-like material for the solo trumpet with its spurts of brilliance countered by quiet response. The triumphant concluding strains for the brass continue to unfold the "cadenza" material and include the many idioms of Spanish popular music which have been present since the opening measures.

San Miguel left no clear explanation for his title; its interpretation ranges from homage, to an ear of corn, to that of a vanquished bull. There is no doubt, however, that La Oreja de Oro is a classic, an unusual piece of Spanish popular music.