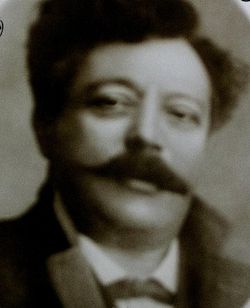 Best known for his marches, Davide Dele Cese was an Italian band leader, composer and teacher who enjoyed a long and rich musical career. His march, Inglesina, is one of his most popular marches and is an international favorite. This accomplished edition by the former director of the United States Marine Band is based on the original 1871 Italian edition and brings new excitement and freshness to this European classic.

Davide Delle Cese wrote this march in 1897 while he was bandmaster at Bitonto, a town near the Adriatic seaport city of Bari. This area, a port of embarkation during the Crusades and a longtime center for exchanges between East and West, has been visited by tourists from many countries, including England.

Whether Delle Cese has a certain "Inglesina" in mind when composing this march is not known. Considering the appreciative attention which mature young ladies traditionally receive from young Italian men, the subject in title was probably not too little, nor too young.

L'Inglesina, originally Linglesina (The Little English Girl), was written in 1871 [sic]. A concert march or marcia sinfonica, it is composed in a more flexible form than the standard military march. Its phrases and sections are often asymmetrical. Various elements are reintroduced to create dramatic effect, along with sudden dynamic shifts and wide-ranging expressiveness. This piece is an important part of the march repertoire, particularly as an example of the late nineteenth-century, Italian concert march style. This edition by John Bourgeois, former director of the United States Marine Band, brings new excitement and freshness to the original European classic.