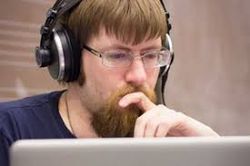 Kyle Vanderburg (b. 1986, Poplar Bluff, Missouri) is an American composer.

Dr. Vanderburg grew up in southeast Missouri where the Ozark foothills meet the Mississippi River valley. He holds degrees from Drury University (BA) and the University of Oklahoma (MM, DMA), and has studied under composers Carlyle Sharpe, Marvin Lamb, Konstantinos Karathanasis, and Roland Barrett. He has participated in composition master classes with David Maslanka, Chris Brubeck, Benjamin Broening, and others. He has previously taught at the University of Oklahoma, Rose State College (OK), and Randall University (OK), and North Dakota State University.

Raised on southern gospel and American hymnody, his music tries to walk the line between eliciting nostalgia and devising innovative sonic worlds. His electronic works often play with familiar sounds in new contexts (like a teakettle that turns into a thunderstorm), his acoustic works feature catchy melodies and too many time signatures. He writes music he hopes his parents will like.

Kyle's music has been heard abroad in the usual venues, but some of the recent interesting performances have been presenting music based on the work of painter Ed Ruscha and sonifying climate data at the National Weather Center Biennale. He enjoys trying new compositional tactics such as tracking color via webcam to manipulate sound and using cloud computing to allow real-time audience collaboration, but he still develops musical ideas at a piano.

When not composing, Kyle researches the creative process as it pertains to music, and runs the musical workshop NoteForge through which he creates and maintains a variety of projects such as Liszt, a web-based conservatory management application.