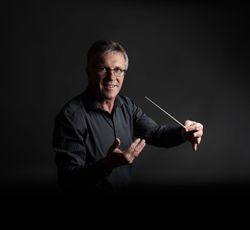 Mr. Gäble has dedicated his life to music, especially brass music. The course for this was set in early childhood, when singing together with the mother as a pastime with a wide variety of housework. This was followed by the recorder and, over time, many other instruments, all of which the autodidact taught himself.

For the music enthusiast Kurt Gäble, it was not a big step from making music to composing. Studying music in Augsburg was the logical consequence of Gäble's talent and passion for music.

Mr. Gäble has created around 100 original works and arrangements for wind orchestra. Due to his career and his broad interest in music, he moves in a wide variety of genres. In the course of time, unique classical arrangements such as Lift Your Eyes from the oratorio Elias (Felix Mendelssohn-Bartholdy) or a variety of modern original compositions such as Dialogue of the Generations or The Blue Planet were created. But also arrangements of rock and pop songs such as Bergwerk (Rainhard Fendrich) and arrangements of new sacred songs for choir and wind orchestra testify to his creative and versatile creative power. And last but not least, marches like Salemonia or the polka Wir Musikanten are part of the standard repertoire of European wind orchestras.

Gäble's original works usually have a profound content and convey a message and values. His musicals such as Freude and Franziskus exhibit this character, not only in their implementation with wind orchestra, choir and actors, but also in their content, which is often Christian, socially and ecologically inspired, to experience a special sense of community.