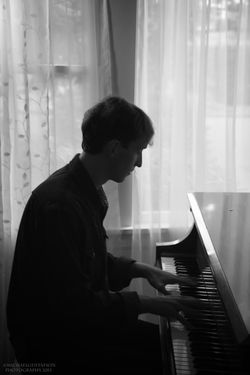 Kenny Regan (b. 1995) is a composer, jazz pianist, oboist, vocalist and educator based in Los Angeles, Calif.

Regan is pursuing [2017] a Bachelor of Music degree in composition and a minor in jazz studies in the Thornton School of Music at the University of Southern California. At USC’s Thornton School of Music, Kenny works as an orchestrator and administrative aide for the Department of Choral and Sacred Music, and is an official tutor of music theory and aural skills with the Academic Resource Center. He also serves as a mentor for the Thornton Community Engagement Program, where he teaches ensembles and offers private lessons to underserved schools in the Los Angeles area. Kenny has studied privately with Frank Ticheli, Russ Ferrante, Sean Friar and Ted Hearne.

His work has been performed or recorded by the USC Thornton Chamber Singers, the Thornton Jazz Orchestra, the USC Concerto Chamber Orchestra, the Beijing International Film Festival Orchestra, and the Rivals in Harmony choir. Additionally, he has composed for over a dozen student films and video games at the University of Southern California.

Kenny composes music for the video game At Sundown; the game has won the BAFTA “Ones to Watch” award, the Dare to Be Digital international game development competition, and the United States Microsoft Imagine Cup. Recently, his piece 3 Devotions for English Horn and Piano was recorded at Capitol Records and will be included on a solo album featuring English hornist Marissa Honda.

As a performer, Kenny has been involved with a multiplicity of genres. He is a member of the prestigious Thornton Chamber Singers, who have recently performed with the Rolling Stones and are scheduled to tour in the United Kingdom in 2018. Other ensembles with which Kenny is currently involved include the USC Concerto Chamber Orchestra, the Collegium Workshop, the Renaissance Shawm Ensemble, Rivals in Harmony, Luce Chorus, the USC Choral Society, the Thornton University Chorus, and a jazz fusion combo led by Alphonso Johnson.