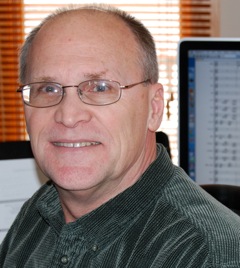 Mr. Snoeck grew up in the Detroit suburb of Roseville where his high school band director, Seraphime Mike, got him started in arranging and composition by encouragement, assistance and performances of pieces.

His degrees are BS Ed, and graduate, MM, degrees are from Central Michigan University. During a composition class he composed Scaramouch which was premiered as a student at CMU. Subsequently, he was a faculty member at CMU for four years teaching percussion and arranging for the marching band. Mr. Snoeck had two great influences during his time at CMU. Norman Dietz, Director of Bands, and Jack Saunders, Assistant Director of Bands.

In the mid-seventies Mr. Snoeck taught in the Bridgeport School District in Michigan for five years before moving to Illinois. The move to Lake Park High School, Roselle, Illinois, in 1981 was the last of his teaching career, where he taught until retirement in 2004.

Along the way he judged drum corps and marching bands and taught the horn line of the Cavaliers from 1985-89, arranging the 1989 program.