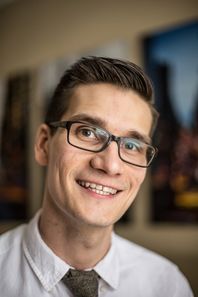 Kenley Kristofferson (b. 31 December 1983, Winnipeg, Manitoba) is a Canadian composer and music educator.

Mr. Kristofferson is a composer for concert band, concert choir, symphony orchestra and video games. Growing up as a euphonium player in Gimli, Manitoba, Canada, he later went on to complete his B. Mus and B. Ed degrees from the University of Manitoba and became one of the music teachers at Lord Selkirk Regional Comprehensive Secondary School in Selkirk, MB. In 2019, he completed his Master of Music in Composition from Brandon University, studying under Dr. T. Patrick Carrabré.

Kristofferson began composing at a young age, learning music by ear at the piano, then eventually writing for his own. Through his father's job at the Evergreen School Division, his family acquired a computer and the internet through an early-adopters' ownership program, getting them earlier than others in his neighbourhood. As a teenager, he downloaded MIDI files of TV and movie themes, as well as video games and anime, and ripped the data into a notation program so he could score study his favourite music at the time. Like his early piano playing, it wasn't long before he was using the software to write his own digital music. During his high school years, he pestered his high school music teacher for scores of their band music and, before long, began writing his own.

He has written commercial work for video game franchises such as Betty Boop, Disney’s DuckTales, KRE-O and Warhammer 40,000, though his music puts clear focus on melody and texture, resulting in an often singable theme overtop of evocative and warm harmonies. The score for his short film on the early life of astronomer Carl Sagan, Star Stuff, was nominated for Best Original Score in the “Short” category in the 2016 International Sound and Film Music Festival in Croatia.