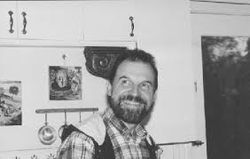 While very young, he and his family moved to Lake Charles, Louisiana. He began composing at the age of ten. He studied at The North Carolina School of the Arts [Winston-Salem], and the Juilliard School of Music for bachelor's and master's degrees. Among his teachers there were Vincent Persichetti and Hugo Weisgall. He was the recipient of a two-year Irving Berlin Teaching Fellowship, and while still a student at Juilliard, his opera Migle and the Bugs received its New York premiere at Alice Tully Hall.

Keith Gates composed in many genres including symphonies, concerti and operas. His 100+ works are for band, wind ensemble, orchestra, and choir, as well as for various chamber ensembles and soloists. He received commissions and grants to write the operas Tom Sawyer, The Hollow, Evangeline, and The Christmas Coin.

Keith Gates received many other commissions from individuals as well as high school, university, and military bands. He was the recipient of numerous awards, including the Louisiana Artist Fellowship, the Louisiana Music Teachers Association Commission Award, the Shearman Research Grant, the Fanfare Festival Composition Award, the National Flute Association Newly Published Music Award, and the Shearman Fine Arts Endowed Professorship (McNeese). He was named 1996 Artist of the Year by the Calcasieu Arts and Humanities Council.