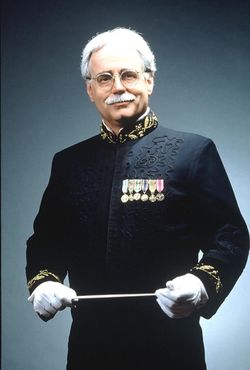 Keith Brion (b. 9 July 1933, Philipsburg, Penn.) is an American conductor and arranger.

Mr. Brion studied music education at West Chester State University and piccolo with John C. Krell, then taught in New Jersey schools while studying for a master's degree at Rutgers University. He played piccolo with the New Jersey Symphony, and founded the North Jersey Wind Symphony, of which he was music director.

Mr. Brion is best known as the music director of his own New Sousa Band, begun in 1979 and a realization of Mr. Brion’s dream to reincarnate the Sousa Band and once again tour America’s towns and cities. Mr. Brion impersonates Sousa in these concerts.

He has been a frequent guest conductor of professional bands, among which are the Stockholm Symphonic Wind Orchestra, New York City’s Goldman Band, The California Wind Orchestra, and the Allentown Band. He has also appeared with most of the major service bands, including the U.S. Marine Band, Army Field Band, Army Band, Coast Guard Band, and the U.S. Army Band of Europe in Heidelberg, plus the National Music Camp at Interlochen.

In addition to leading the New Sousa Band, Mr. Brion maintains an active career as an orchestra conductor, presenting his popular Sousa revival concerts with almost all of America’s symphony orchestras, including the Boston Pops, the Philadelphia Orchestra, and the St. Louis, Dallas, and Milwaukee symphonies. His overseas orchestral engagements have included the London Concert Orchestra and the Gothenburg Symphony.

Keith Brion is a former director of bands at Yale University, where he led the Yale Band in concerts at the Kennedy Center, Carnegie Hall, and in an all-Ives program at Amsterdam’s Concertgebouw. Prior to coming to Yale, he was the founder and music director of the North Jersey Wind Symphony and a long-time band educator and music supervisor in the New Jersey public schools.

He has published many editions for band, including the music of Charles Ives, Percy Aldridge Grainger, John Philip Sousa, and D.W. Reeves, and is the author of numerous articles. He has published a series of Sousa publications.