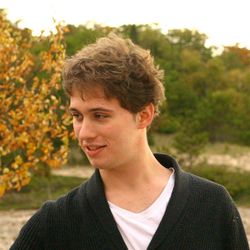 Karl Ronneburg (b. 1994, Houston, Tx.) is an active composer and percussionist.

Growing up in Sammamish, Washington, he played professionally in several local orchestras, including the Philharmonia Northwest Orchestra and the Bellevue Philharmonic. In his senior year in high school, he was selected as one of five percussionists from across the country to participate in the first-ever National Youth Orchestra of the United States of America, with which he performed at the Lincoln Center, the Moscow Conservatory, the Mariinsky Theater in St. Petersburg, and at BBC Proms in London under the baton of Valery Gergiev and with soloist Joshua Bell.

In his time at the University of Michigan (BM, 2017), Karl performed regularly with the University Symphony Orchestra, the University Symphony Band, the Michigan Percussion Ensemble, and the Vencedores Samba Bateria. As a composer, he studied under Paul Schoenfeld, Erik Santos, Michael Daugherty, and Evan Chambers, and has premiered works for wind ensemble, string quartet, percussion ensemble, and a variety of mixed chamber groups, often featuring electronics. In the summer of 2015, Karl had the honor to be chosen as one of four percussionists from the University of Michigan to be part of a featured guest percussion quartet at the Stellenbosch International Chamber Music Festival in Stellenbosch, South Africa.

In addition, he is an active performer in a variety of interdisciplinary settings, including an adaptation of Phillip Glass’s Einstein on the Beach for his living room, past and upcoming performances at the THREADS All Arts Festival as a multimedia artist and with the Weak Staff performance art group, a solo performance at the ShedX UofM conference, and a solo role as the Dictator in Meredith Monk’s Quarry, presented at the UofM Dance Department’s Bicentennial show, Glancing Back, Dancing Forward.

Karl currently lives in New York City, where he is pursuing his Master's in Composition at the New School as a student of Missy Mazzoli.