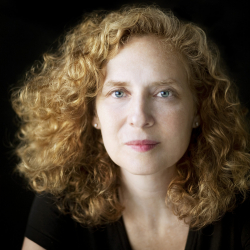 Julia Wolfe (b. 18 December 1958, Philadelphia, Penn.) is an American composer and educator.

As a teenager, Dr. Wolfe learned piano but she only began to study music seriously after taking a musicianship class at the University of Michigan, where she received a B.A. in music and theater as a member of Phi Beta Kappa in 1982. In her early twenties, Wolfe wrote music for an all-female theatre troupe.

She went to Yale in 1984 and studied primarily with Martin Bresnick. After receiving her M.M. in 1986, Wolfe, Michael Gordon, and David Lang founded the new music collective Bang on a Can in 1987.

Wolfe received a Fulbright Scholarship to travel to Amsterdam in 1992. In 2012, she received a Ph.D. in composition from Princeton University. She has been a professor of music composition at New York University in the Steinhardt School since 2009, prior to which she was an adjunct professor at the Manhattan School of Music for seven years.

In 2015, Wolfe won the Pulitzer Prize for music for her work Anthracite Fields, and in 2016 she was named a MacArthur Fellowship recipient. In 2018, she was a recipient of an honorary degree from Drew University in New Jersey.

The 2019 world premiere of Fire in my mouth, a large-scale work for orchestra and women’s chorus, by the New York Philharmonic with The Crossing and the Young People’s Chorus of New York City, received extensive acclaim. The work is the third in a series of compositions about the American worker.