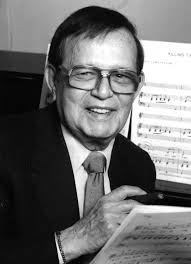 Styne was born in London as Julius Kerwin Stein to Jewish immigrants from the Ukraine, Russian Empire who ran a small grocery. At the age of eight he moved with his family to Chicago, where at an early age he began taking piano lessons. He proved to be a prodigy and performed with the Chicago, St. Louis, and Detroit Symphonies before he was ten years old.

Styne attended Chicago Musical College, but before then he had already attracted attention of another teenager, Mike Todd, later a successful film producer, who commissioned him to write a song for a musical act that he was creating. It was the first of over 1,500 published songs Styne composed in his career.

Styne established his own dance band, which brought him to the notice of Hollywood, where he was championed by Frank Sinatra and where he began a collaboration with lyricist Sammy Cahn, with whom he wrote many songs for the movies, including It's Been a Long, Long Time (#1 for 3 weeks for Harry James and His Orchestra in 1945), Five Minutes More, and the Oscar-winning Three Coins in the Fountain. He collaborated on the score for the 1955 musical film My Sister Eileen with Leo Robin. Ten of his songs were nominated for the Oscar, many written with Cahn, including I've Heard That Song Before (#1 for 13 weeks for Harry James and His Orchestra in 1943), I'll Walk Alone, It's Magic (a #2 hit for Doris Day in 1948) and I Fall in Love Too Easily.

In 1947, Styne wrote his first score for a Broadway musical, High Button Shoes with Cahn, and over the next several decades wrote the scores for many Broadway shows, most notably Gentlemen Prefer Blondes, Peter Pan (additional music), Bells Are Ringing, Gypsy, Do Re Mi, Funny Girl, Sugar (with a story based on the movie Some Like It Hot, but all new music), and the Tony-winning Hallelujah, Baby!.