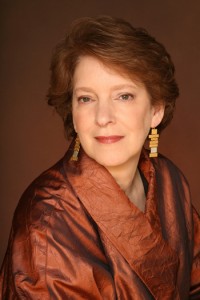 Judith Shatin (b. 1949, Boston, Mass.) is a composer, educator and sound artist.

Dr. Shatin's musical practice engages our social, cultural, and physical environments. She draws on expanded instrumental palettes and a cornucopia of the sounding world, from machines in a deep coal mine, to the calls of animals, the shuttle of a wooden loom, a lawnmower racing up a lawn, the ripping of tape. Timbral exploration and dynamic narrative design are fundamental to her compositional design, while collaboration with musicians, artists and community groups are central to her musical life.

Shatin’s music has been commissioned by organizations including the Barlow Endowment and Fromm Foundations, Carnegie Hall, the McKim Fund of the Library of Congress, the Lila Wallace-Readers Digest Arts Partners Program, Music-at-LaGesse Foundation and the National Endowment for the Arts. It has been featured at festivals including Aspen, BAM Next Wave, Grand Teton, and West Cork, while orchestras that have presented her music include the Denver, Houston, and Richmond Symphonies, as well as American Composers Orchestra. Shatin has held residencies at Bellagio (Italy), Brahmshaus (Germany), and in the U.S. at MacDowell, the Virginia Center for the Creative Arts, and Yaddo.

She has been honored with four Composer Fellowships from the National Endowment for the Arts, as well as awards from the American Music Center, Meet the Composer, the New Jersey State Arts Council and the Virginia Commission for the Arts. A two-year retrospective of her music, and the commission for her evening-length folk oratorio, COAL, was sponsored by the Lila Wallace-Readers Digest Arts Partners Program. Shatin’s music is featured in Women of Influence in Contemporary Music, Nine American Composers (Scarecrow Press). Long an advocate for her fellow composers, Shatin has served on the boards of the American Composers Alliance, the League/ISCM, and the International Alliance for Women in Music (IAWM) and as president of American Women Composers Inc.; she currently [2017] serves on the National Council of the Atlantic Center for the Arts.

In demand as a master teacher, she has been BMI composer-in-residence at Vanderbilt University, Master Artist at the Atlantic Center for the Arts, and Senior Composer at the Wellesley Composers Conference, among many others.