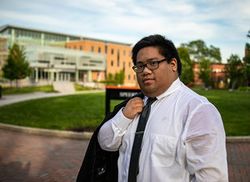 Joshua Alexander Idio (b. 1995) is an American composer.

Mr. Idio began his career in music at the William Paterson University of New Jersey where he received his bachelor’s degree in music education in May of 2018. He studied under several field professors, including Dr. Carol Frierson-Campbell, Dr. J. Craig Davis, and Prof. Richard Chiandusse. He also took a semester studying arranging with Dr. Jeffrey Kresky.

Joshua started his composing career in high school after meeting and performing with other well-known composers such as Frank Ticheli. Since then, he composed music for including concert band, marching band, orchestra, and various chamber ensembles. He is also a freelance video game/film composer. In April of 2018, he conducted his premiere work Overture for Education with the Union Middle School Concert Band from Rutherford, New Jersey. In December 2019, through the “…And We Were Heard” Initiative, Overture for Education was also performed by Dr. Andrew Hunter and the University of Texas in El Paso Symphonic Band.

Mr. Idio was a composer for Woodson Percussion & Publishing until their dissolution in January 2020. He is currently [2021] a member of the National Association for Music Education, the New Jersey Music Educators Association, and the Association of Concert Bands.