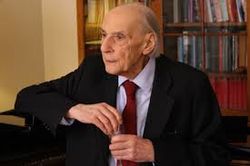 Joseph Horovitz (b. 26 May 1926, Vienna, Aus.) is a British composer, conductor, arranger and educator.

Horovitz's family emigrated to Englandi n 1938 to escape the Nazis. His father was the publisher Béla Horovitz, the co-founder in 1923, with Ludwig Goldscheider, of Phaidon Press. His sister was the classical music promoter Hannah Horovitz( 1936-2010).

He studied music and modern languages at New College, Oxford, and later attended the Royal College of Music in London, studying composition with Gordon Jacob. He then undertook a year of further study with Nadia Boulanger in Paris.

His musical career began in 1950, when he became music director at the Bristol Old Vic. He was subsequently active as a conductor of ballet and opera, and toured Europe and the United States.

Horovitz has been professor of composition at the Royal College of Music since 1961, and a council member of the Composers' Guild of Great Britain since 1970. Between 1969 and 1996 he belonged to the board of the Performing Rights Society. His works include 16 ballets, including Alice in Wonderland (1953), two one-act operas (The Dumb Wife and Gentlemen’s Island), and concertos for violin, oboe, clarinet, bassoon, trumpet, euphonium, tuba and percussion, as well as a popular and often performed jazz concerto for harpsichord or piano. A large number of his works have been written for wind orchestra and brass band.

His music for television has included Lillie, Rumpole of the Bailey, The Search for the Nile, The Fight Against Slavery, Wessex Tales and Partners in Crime.

In 1959, he was awarded the Commonwealth Medal, and since then he has received many other awards for his compositions.