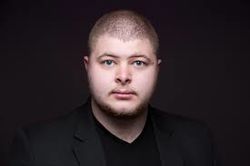 Joseph Foster Harkins (b.1995, Harrisburg, Penn.) is an American composer.

Mr. Harkins received his master’s degree in composition from the University of Cincinnati College-Conservatory of Music where he taught music history as a graduate assistant with Matthew Peattie and Angela Swift, and completed undergraduate degrees in composition and oboe performance at West Chester University of Pennsylvania. He is currently [2021] pursuing doctoral work in composition at the Peabody Institute, studying with Oscar Bettison.

Mr. Harkins is a composer of music deeply inspired by the Appalachian Mountains and by rock music across the decades. His work has been performed and disseminated across North America, has enjoyed two awards in Instrumental Chamber Music from the American Prize (Finalist for the Piano Sonatina No. 2 and Honorable Mention for Mountain Streams), and made a record label debut in May 2020 on the compilation disc Polychrome.

He has appeared as fellow at the Fresh Inc and RED NOTE Festivals and the Cortona Sessions, has recently collaborated with notable artists including flutist Sarah Brady, Transient Canvas, F-Plus, and Unheard-Of//Ensemble, and is a founding member of the Queen City Composer Collective.