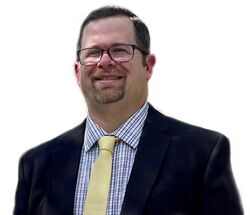 Joseph Benjamin Earp (b. 1984) is an American composer and music educator.

Dr. Earp received his undergraduate degree in music education from the University of North Carolina at Charlotte, Master of Music in Music Education degree from Anderson (S.C.) University, and Doctor of Music Education degree from Liberty University (Lynchburg, Va). In 2019, Dr. Earp was inducted into the Omega Nu Lambda National College Honor Society based on his academic achievement at Liberty University. In 2020, he was named as a Distinguished Alumni Award recipient by the College of Arts and Architecture at University of North Carolina at Charlotte.

Dr. Earp is [2022] the director of bands at Hinds Community College in Raymond, Mississippi. His professional teaching career began in 2006 as drector of bands at Seneca High School in South Carolina. After two years, he then taught band at Robbinsville Middle and High Schools for a year before becoming the founding director of bands at Cox Mill High School in Concord, North Carolina. Major accomplishments teaching at the secondary level include one of his symphonic bands auditioning and being selected to perform at the 2013 North Carolina Music Educators State Conference, multiple superior ratings, grand championships, awards, and recognitions from his instrumental ensembles.

After eight years of numerous achievements at Cox Mill High School, he moved into his role at Limestone University (Gaffney, S.C.) as director of athletic bands, elevating many elements of Limestone’s athletic band program. A major accomplishment of the Limestone University Marching Saints was auditioning and being selected to lead one of the afternoon parades at Walt Disney World’s Magic Kingdom in January of 2019. Just prior to his role at Hinds Community College, Dr. Earp was the director of instrumental music at Pfeiffer University in Misenheimer, North Carolina. Tasked with reviving the instrumental music program at Pfeiffer, he reestablished the wind ensemble and pep band. Additionally, he wrote Pfeiffer’s first fight song that was adopted by the school’s student government association. Dr. Earp also insured the instrumental building at Pfeiffer received much needed renovations.

In addition to teaching, Dr. Earp is an active published composer and arranger with his music being performed internationally. His major compositional accomplishments include being winner of the 2010 Claude T. Smith Composition Contest in Missouri, winner of the 2018 Thornton Community Band Composition Contest in Colorado, multiple J.W. Pepper Editors’ Choice awards, and multiple works selected to be part of the Band World Magazine Top 100.