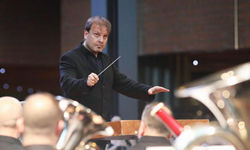 He attended music school, where he began studying euphonium and piano, continuing them in the Alcoy and Valencia Conservatories. He studied conducting with Jan Cober (the Netherlands), Eugenen Corporon, and James Croft (the United States), among others. He has been invited to guest conduct a number of prestigious band and orchestras. He was chief conductor of the Castell de Castells, Yatova, Bocairent, Xixona and Muro bands. As a composer, he has written music for chamber ensembles, symphonic music, works for chorus, and incidental music for the theater. Currently, Pascual Vilaplana is principal conductor of the Orquesta Sinfonica de Albacete and director of the Nova de Xativa and l’Orquesta Filarmonia wind bands.