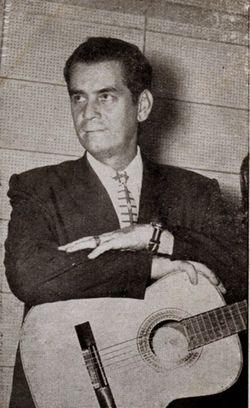 At the age of 14, with the savings from his job as a coffee picker, he bought his first tiple (a plucked-string chordophone of the guitar family) from Pedro Nieto, a musician from the region, with the promise that he will be taught to play. From that moment on, music was everything for José Macias.

His first composition of "El Caratejo", as he was fondly called by his friends, was La Gitana de los Ojos Negros, (Dark-eyed Gypsy) performed in 1932 for a serenade to which he was hired in the municipality of Neira. In 1938 he composed the dance Caminito of Samaria "and the bambuco Ojos Miradme dedicated to the beautiful young Celia Díaz. (A bambuco is a genre of Colombian music similar to a waltz or polka.)

Macía was a prolific composer, with more than 200 compositions to his credit, many of which are still played today in competitions and festivals in the Andean region of Colombia.