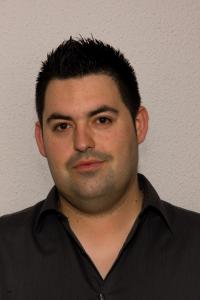 José Miguel Fayos-Jordán (b. 1980, Spain) is a Spanish composer and educator.

Fayos-Jordán studied composition at the Conservatory of Music "J.Rodrigo," Valencia culminating his career with the Extraordinary Award. Some of his teachers include: R. Ramos, G. Jimenez, E. Sanz-Burguete, C. Cano, E. and F. Tamarit Calandín. He also studied with José R. Pascual-Vilaplana and courses with Jan Cober, conducting in various parts of Spain, especilaly Valencia..

He has received commissions from institutions such as the Valencian Institute of Music, International Music Festival of La Mancha and Grupo Instrumental de Valencia.

Fayos-Jordán has been professor of Harmony, Analysis, Music History and Fundamentals of Composition at various conservatories in the Valencia area, and currently teaches at the Conservatory of Music in Jávea (Alicante) and the Regional School of Music of Vall d'Albaida (Valencia).