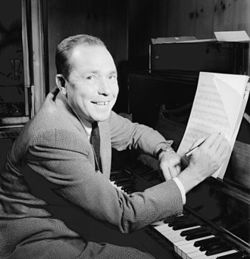 Mercer liked music as a small child and attributed his musical talent to his mother, who would sing sentimental ballads. His aunt took him to see minstrel and vaudeville shows where he heard “coon songs” and ragtime. Mercer’s exposure to black music was perhaps unique among the white songwriters of his generation.

Mercer moved to New York in 1928, when he was 19. The music he loved, jazz and blues, was booming and vaudeville, though beginning to fade, was still a strong musical presence. Mercer’s first few jobs were as a bit actor, but he soon returned to singing and lyric writing. His fortunes improved dramatically with a chance pairing with Indiana-born Hoagy Carmichael, already famous for the standard Stardust, The two spent a year laboring over Lazybones, which became a hit one week after its first radio broadcast, Thus, although he had established himself in the New York music world, when Mercer was offered a job in Hollywood to compose songs and perform in low-budget musicals for RKO, he accepted and followed idol Bing Crosby west in 1935. His first big Hollywood song I'm an Old Cowhand from the Rio Grande was inspired by a road trip through Texas (he wrote both the music and the lyric). It was performed by Crosby in the film Rhythm on the Range in 1936.

Mercer is best known as a Tin Pan Alley lyricist, but he also composed music. He was also a popular singer who recorded his own songs as well as those written by others. From the mid-1930s through the mid-1950s, many of the songs Mercer wrote and performed were among the most popular hits of the time. He wrote the lyrics to more than fifteen hundred songs, including compositions for movies and Broadway shows. He received nineteen Academy Award nominations, and won four Best Original Song Oscars.