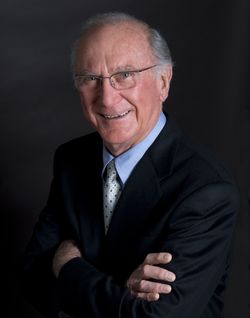 John H. Beck (b. 16 February 1933) is an American composer, educator and percussionist.

John H. Beck was a member of the U.S. Marine Band for four years before joining the Rochester Philharmonic as principal percussionist in 1959 and becoming principal timpanist in 1962. With BM and MM degrees from the Eastman School of Music, he was the professor of percussion for the percussion department and conducted the percussion ensemble from 1959 to 2002. He retired in 2008 and is now Professor Emeritus of Percussion and teaches a class in the history of percussion.

Prof. Beck has made solo appearances with the Rochester Philharmonic Orchestra, the Eastman Wind Ensemble, the Syracuse (N.Y.) Wind Ensemble, the Chautauqua Band, Memphis State Band, Rochester Chamber Orchestra and Filharmonia Pomorska in Poland. Other performing and teaching engagements have taken him to all corners of the world including Luxembourg, Russia, Japan, Denmark, Brazil, China, Beligum, Germany, France and Poland.

Beck was instrumental in bringing the Percussive Arts Society (PAS) to Rochester in 1976 for their first international convention, at which he performed Phillip Lambro's Two Pictures. He is a past president of PAS and in 1999 was inducted into the prestigious PAS Hall of Fame. That same year he received an award from the Arts & Culture Council of Greater Rochester for contributions to the arts. In May 1997 he received the Eisenhart Award in recognition of distinguished teaching from the Eastman School of Music, and in May 2003 he received the Edward Peck Curtis Award for Excellence in Undergraduate Teaching from the University of Rochester. On May 12, 2016 he received an honorary Doctor of Music degree from the College of Performing Arts, Rowan University, N.J.