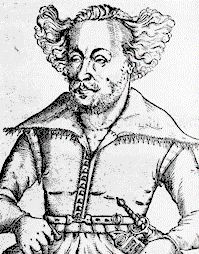 On the death of his father, Schein moved to Dresden where he joined the choir of the Elector of Saxony as a boy soprano. In addition to singing in the choir, he received a thorough musical training with Rogier Michael, the Kapellmeister, who recognized his extraordinary talent. From 1603 to 1607 he studied at Pforta, and from 1608 to 1612 attended the University of Leipzig, where he studied law in addition to liberal arts. Upon graduating, he was employed briefly by Gottfried von Wolffersdorff as the house music director and tutor to his children; later he became Kapellmeister at Weimar, and shortly thereafter became cantor at the Thomasschule zu Leipzig, conducting the Thomanerchor, a post which he held for the rest of his life.

He was one of the first to import the early Italian stylistic innovations into German music, and was one of the most polished composers of the period. Possibly his most famous collection was his only collection of instrumental music, the Banchetto musicale ("musical banquet") (1617) which contains twenty separate variation suites; they are among the earliest, and most perfect, representatives of the form.