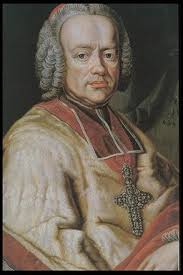 Eberlin's first musical training began in 1712 at the Jesuit Gymnasium of St. Salvator in Augsburg. His teachers there were Georg Egger and Balthasar Siberer, who taught him how to play the organ. He began his university education in 1721 at the Benedictine University in Salzburg where he studied law, but then dropped out of university in 1723.

His first breakthrough was in 1727 when he became the organist for Count Leopold von Firmian (then Archbishop of Salzburg). He reached the peak of his career when he was the organist for Archbishop Andreas Jakob von Dietrichstein. By 1749 he held the posts of Hof- und Domkapellmeister (Court and Cathedral chapel master) simultaneously, an achievement which his successors Michael Haydn, Leopold Mozart, and Mozart himself were not to match. Despite Mozart's father Leopold's great opinion of Eberlin, and having sent the young Mozart some of Eberlin's best known works, his keyboard pieces, the young Mozart later tired of them, writing in a letter of April 20, 1782, that Eberlin's works were "far too trivial to deserve a place beside Handel and Bach."

Eberlin's works bridge the baroque and classical eras. He was a prolific composer, chiefly of church organ and choral music. He composed a great deal of sacred music, including 21 oratorios, 70 masses, keyboard music, and dramas. Greatly respected while he lived, after his death only his keyboard works were remembered.