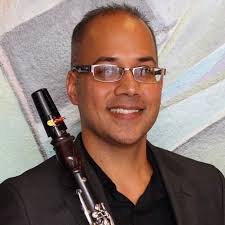 Joseph Samuel (b. 1975, Virginia) is an American composer and conductor.

Joseph Samuel is active in the musical scene of San Antonio as a composer and conductor. He was appointed as the musical director of the San Antonio Community Wind Ensemble in 2019 and also is the associate conductor and a founding member of the San Antonio Harmonie Ensemble. He spent eight years as an active-duty Army musician serving at Fort Eustis, Virginia, Youngsan, Korea, with the 323D Army Band here in San Antonio, TX, and is now an Army Reserve musician with the 191st Army Band in Dublin, Calif. His composition Dublin’s Sword was written for and premiered by the 191st Army Band at the Golden Gate Community Band Festival in June 2019.

In addition to his time in the Army Band, Mr. Samuel has spent many years in a wide variety of professional activities including freelance clarinetist and teacher, conductor, church worship leader/song-writer, and corporate sales manager for a security company in Chicago, and has gained respect as a top clarinet repair technician.