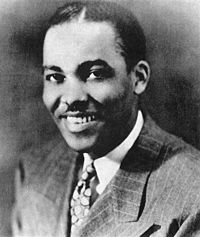 Garland studied music at Shaw University and the Aeolian Conservatory. He started by playing classical music but joined a jazz band, Graham Jackson's Seminole Syncopators, in 1924, where he first recorded. He had a long run of associations as a sideman on saxophone and clarinet, with Elmer Snowden (1925), Joe Steele, Henri Saparo, Leon Abbey (including a tour of South America), Charlie Skeete and Jelly Roll Morton in the 1920s. The 1930s saw him playing with Bobby Neal (1931) and the Mills Blue Rhythm Band; he was both a performer and an arranger for the Blue Rhythm Band from 1932 to 1936, when Lucky Millinder replaced him. Following this he played with Edgar Hayes (1937), Don Redman (1938), and Louis Armstrong (1939–42). In the 1940s he played with Claude Hopkins and others, and then returned to Armstrong's band from 1945-47. Following this he played with Herbie Fields, Hopkins again, and Earl Hines (1948). In the 1950s, he went into semi-retirement.

Garland wrote a number of well-known swing jazz hits, including Serenade To A Savage for Artie Shaw (one of Shaw's gold records) and Leap Frog for bandleader Les Brown.