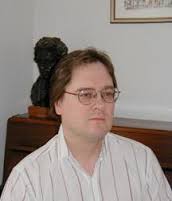 Dr. Nagel attended North Allegheny High School in Wexford. He received his DMA in composition from The University of Texas at Austin in 1992 where he had been the recipient of a doctoral fellowship. He received the MA degree in theory and composition from the University of Pittsburgh (1985) and the BA degree from Marietta College (1982). His principal composition teachers have included Eugene Kurtz, Dan Welcher, Donald Grantham, Russell Pinkston, Karl Korte, Morton Subotnick, Peter Sculthorpe, Stephen Montague, Wayne Slawson, John Peel, William Buelow, and David Berlin.

He won an ASCAP Young Composers Award in 1988 for a chamber orchestral work, and placed fourth in the 1991 International New Composition Competition for original works in the tape-and-instrument medium.

Dr. Nagel joined the Ball State University School of Music faculty in the autumn of 1992. Performances of his compositions were given in various American cities and in England, and at conferences of the Society of Composers, Inc. (SCI) and the Society for Electro-Acoustic Music in the United States (SEAMUS).

He was granted a 12-month Fulbright Fellowship to visit Australia and held a post-graduate position at the University of Sydney. His professional affiliations included membership in the Society for Electro-Acoustic Music in the United States (SEAMUS); Society of Composers, Inc.; Society of Music Theory, and Texas Society for Music Theory. He is a member of Phi Beta Kappa.