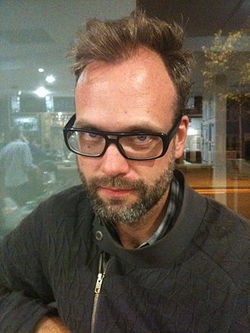 Talbot grew up in Mitcham, South London, and attended King's College School, Wimbledon, on a music scholarship from the age of eight. Talbot played the piano and oboe, studied composition privately with Brian Elias and after receiving a Bachelor of Music degree from Royal Holloway University of London, he completed a Master of Music degree (composition) at Guildhall School of Music and Drama under Simon Bainbridge.

Though classically trained, Talbot's early career centred on film and television scores and pop arrangements. His work as arranger and keyboardist with Neil Hannon's band The Divine Comedy continued from 1993 until 2002. In 1999, following some minor television scoring jobs, Talbot was commissioned to write the theme and score for BBC Two's comedy series The League of Gentlemen, for which he was awarded the Royal Television Society Award for Best Title Music.

He has written for a wide variety of purposes and an accordingly broad range of styles, including instrumental and vocal concert music, film and television scores, pop arrangements and works for dance. He is therefore known to sometimes disparate audiences for quite different works.

Works for dance include Chroma (2006), Genus (2007), and The Winter's Tale (2014),a full-length narrative ballet scores commissioned by The Royal Ballet and the National Ballet of Canada.