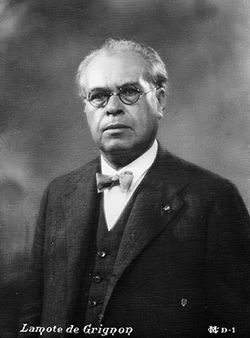 Joan Lamote de Grignon was the son of parents of French descent Luis Lamote de Grignon and Elena Bocquet. He studied with Felip Pedrell in Barcelona. In 1911 he founded the Barcelona Symphony Orchestra, of which he was also music director. He directed the Berlin Philharmonic Orchestra. He was the successor of Celestí Sadurní in directing the Municipal Band of Barcelona in 1914, from where he promoted young performers and provided the band with an acknowledged repertoire. Three years later he was appointed director of the Conservatory of the Gran Teatre del Liceu of Barcelona. In 1943 he founded the Valencia Municipal Orchestra, which he directed until 1949.

His compositions, including transcriptions and arrangements, comprise some 150 songs, the oratorio La nit de Nadal (1906), the lyric drama Hespèria (1907), a symphonic trilogy, a symphony, a Missa eucarística for two voices and organ, motets and spiritual songs, and El parc d'atraccions for piano. There are also works for orchestra with voice, lieder and songs, scenic music, voice and piano, sardanes for cobla, and transcriptions for band.

The archive of the Lamote de Grignon family, with works by Joan and his son Ricard, is at the document repository of the Generalitat of Catalunya and may be studied in the Biblioteca de Catalunya.