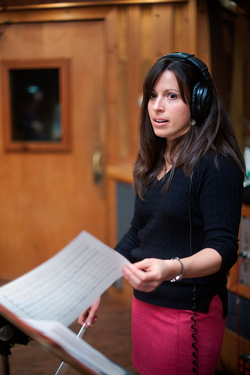 JoAnne Harris (b. 1984) is an American pianist, conductor, arranger, composer and vocalist.

Ms. Harris has orchestrated, conducted and recorded film scores at Abbey Road, East West, The Village, and Avatar with artists such as grammy winning Kurt Elling and members of the Hungarian Radio Symphony Orchestra. Her work includes scores for Mal de Ojo (HBO), Cassandra French’s Finishing School (Audience network on DirecTV), 20/20 (ABC), Primetime (ABC), and Dateline (NBC). She has worked as orchestrator and conductor on City of Lies (2018), The Infiltrator (2016), and Cook Off! (2017).

Conducting work includes the Shinnyo-En Lantern Lighting Festival at Lincoln Center (2014, 2015) and serving as the musical director for the New York New Stages festival production of the musical Four Women (2018). She has been an arranger for How I Paid for College (off-Broadway, 2015), Sylvia (Broadway, 2016), Evolution (aerial circus show in Shenzhen, China, 2014) and Chris Cester of the band Jet. She is a 2015 ASCAP “Composer to Watch”, and her concert music includes a winning entry of the Dallas Winds brass fanfare competition.

Ms. Harris teaches orchestration for cinema at CUNY Brooklyn College. She is an active member of Women in Music, a steering committee member of the Society of Composers and Lyricists in New York and a board member of the New York Chapter of the Ravel Study Group.