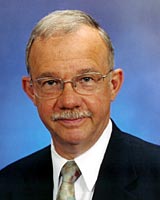 Jerry Brubaker (b. 8 December 1946, Altoona, Penn.) is an American composer and arranger.

He began the study of music at age five, taking piano lessons from his mother for a six-month period. Two years later, he began the study of French horn privately with Ray Detweiler, a trumpet player and teacher. In Junior and Senior high school, Brubaker played in the school band, and performed the Mozart Horn Concert No. 2 with a local orchestra. When he was a sophomore in high school, he went to Chatuaqua to study with Richard Moore, principal horn player with New York City’s Metropolitan Opera Orchestra. This experience helped him decide to pursue a career in music and abandon plans to become either an architect or an engineer. Brubaker received his undergraduate from the Eastman School of Music and his graduate degree from the Catholic University of America. He served for 30 years in the United States Navy Band in Washington, DC as a French horn soloist and composer/arranger. In 1985, he became the Band's Chief Arranger, and held that position until his retirement from the Navy in 1998.

Since his retirement from the Navy Band, Brubaker has been active as a free-lance composer and arranger. He composes and arranges music for Warner Brothers Publications. In addition to his music for band and orchestra, Oxford University Press has published a large amount of his music for chorus.

Mr. Brubaker is well known for his patriotic compositions and arrangements of popular music, motion picture scores and Christmas favorites. He has published over 200 works for band, chorus, and symphony orchestra.