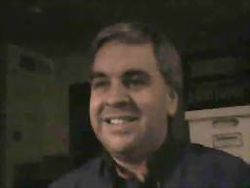 Jazz Schisms was inspired by the ground-breaking jazz recordings of Miles Davis and John Coltrane on the Columbia label in the late 1950s and early 1960s. The goal was to meld the styles of those players seamlessly into a modern wind ensemble setting, and the task proved to be a difficult but satisfying one as the composition took shape.

The most difficult hurdle to clear in fashioning a piece for jazz quintet (trumpet, tenor sax, piano, bass, and drums) and the standard instrumentation of a wind ensemble was this: should the straight-ahead jazz style (with its very "un-bandlike" swing rhythms) predominate or would it be preferable to include the solo quintet into the modern band language? In resolving this issue I found that short episodes of each style was the best solution. In this composition you will find plenty of free improvisation by the quintet soloists in all the idiomatic jazz styles (medium and "up-tempo" swing, rock/funk, and Latin samba) interspersed with moments more characteristic of the modern symphonic band style.

To emphasize the juxtaposition of jazz quintet versus wind ensemble, a similar theme was used for the melodic and harmonic material used in the piece. For the first two-thirds (or so) of the composition, the quite dissonant set of (0, 1, 6, 7) is used frequently. This set is composed of two half-steps spaced a perfect fourth apart. In jazz harmony, this dissonant set (when inverted a bit) is realized as a "#9" chord which is exploited from the opening statement of the quintet. Eventually, this original set gets overwhelmed by its more consonant neighbor set (0, 2, 5, 7), this time, two whole steps spaced a perfect fourth apart.

My sincere thanks to Dr. Tom Caneva of the Ball State University Wind Ensemble for initiating this project and giving me the opportunity to produce a work for his group. The challenge presented to write for such an unusual instrumentation was appreciated. It is my hope that his students and the faculty jazz quintet enjoy this piece and also that other similar works integrating jazz improvisation into the band genre are inspired.