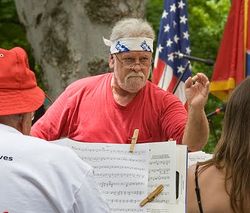 Jay Dawson (b. Nashville, Tenn.) as an American composer, arranger and businessman.

Mr. Dawson has taught music in junior and senior high schools, as well as at the college level. He taught summer graduate courses at the VanderCook College in Chicago for three summers and played French horn with the Nashville Symphony Orchestra for ten years. In 1977, Mr. Dawson was named assistant conductor there. He also directed the Nashville Youth Symphony.

Dawson has written compositions and arrangements for a wide variety of groups and events, including Opryland, USA, the 1982 World’s Fair, and several drum and bugle corps. Dawson is founder and conductor of the Tennessee Winds, a professional concert band. He is also one of the principal officers of the Arrangers Publishing Company in Nashville.