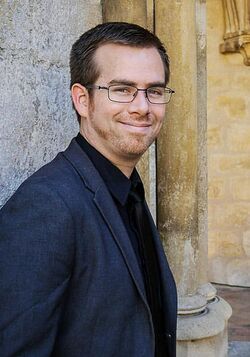 Jason Thorpe Buchanan (b. 1986) is an American composer and educator.

Dr. Thorpe Buchanan holds a Ph.D. in composition from the Eastman School of Music, and degrees in composition and music technology from San José State University (BM and BA, 2008) and the University of Nevada, Las Vegas (MM, 2010), where he taught courses in composition and theory as a graduate student. As a doctoral student, he served as course instructor in electronic music and composition, board member of OSSIA, and assistant conductor for the Musica Nova Ensemble with conductor Brad Lubman at the Eastman School of Music. Primary mentors have included Ricardo Zohn-Muldoon, Steven Takasugi, Pierluigi Billone, Chaya Czernowin, Raphaël Cendo, David Liptak, Virko Baley, Peter Michael Hamel, Jorge Villavicencio Grossmann, Pablo Furman, and Georges Aperghis.

Dr. Thorpe Buchanan composes operatic, orchestral, chamber, electroacoustic, and intermedia works that explore fragmentation, multiplicity, intelligibility, behavior, and the integration of live performance with technology. He is the recipient of a 2010-11 Fulbright Fellowship at the Hochschule für Musik und Theater in Hamburg (DE) as a visiting scholar; a 2013 commission for Asymptotix Flux: Second Study in Entropy from the Mizzou International Composers Festival for Alarm Will Sound; the Howard Hanson Orchestral Prize (2014); a 2014 commission for Double Concerto from the International Horn Society; a 2014 commission from the Blue Water Chamber Orchestra as winner of Iron Composer (2014); two ASCAP Morton Gould Young Composer Awards (2014 and 2015); an American-Scandinavian Foundation Grant (2015); a fellowship and commissions from Royaumont for soliloquios del viento (2016), written for the Talea Ensemble+EXAUDI Vocal Ensemble (UK) and ACTOR-NETWORK THEORY (2017) for the Académie Voix Nouvelles Ensemble; and commissions from Ensemble Nikel/Tzlil Meudcan (Israel, 2014), Iktus Percussion (NYC, 2013), and the NY Virtuoso Singers (2015), a German/American Fulbright Commission (2011), winner of newEar Composer’s Competition (2013); 2017 artist-in-residence at the Brush Creek Foundation (Wyoming); and 2015 artist-in-residence at USF Verftet/City Council of Bergen, Norway. As a nominee for the 2015 Gaudeamus Prize, three works were presented by Insomnio, New European Ensemble, and Slagwerk Den Haag at Gaudeamus Muziekweek (NL).

As 2018 artist-In-residence at the Embassy of Foreign Artists in Geneva, Switzerland, he developed a new, interactive processing environment for surface, tension (2018), responding directly to the discrete physical gestures of performers and governing the behavior of both signal processing and soundfile triggering through wearable technology, sensors, and gestural tracking.

all-forgetting-is-retrieval (2019) for ensemble and augmented conductor was commissioned by the Thailand New Music and Arts Symposium, exploring the formation of human memory, retrieval, failure, and the emotional space of “lost” experiences. Reflexive Iterations (2020) for quintet and extended no-input mixer is, in some way, in response to the events of 2020 and designed as an antidote to life on the internet.

As a guest composer, conductor, and lecturer, Dr. Thorpe Buchanan is widely sought internationally at institutions such as the University of Chicago, Stanford University, and over two dozen universities throughout the United States. Current projects include a large work on the subject of human memory for the International Contemporary Ensemble and Hong Kong New Music Ensemble, commissioned by the MATA Festival in NYC, and research in the field of telematic performance with the [Switch~ Ensemble].