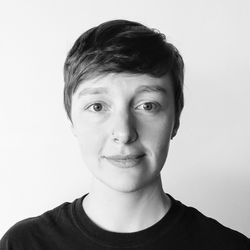 Jasmine Thomasian is pursing a DMA at Northwestern University (expected 2024). They hold an MA from the Eastman School of Music (2019), an MA from the Union Theological Seminary (2017) and a BA from Williams College where they studied with David Kechley, Eric Nathan, and Ileana Perez-Valazquez, and received the Hubbard Hutchinson Memorial Fellowship in Music in 2015.

They are passionate about sound, identity formation, and the interpersonal dynamics of Western art music. Their artistic output spans a range of musical aesthetics, as they approach the search for new sounds and new ways of relating to sounds/instruments/people from a variety of directions. Jasmine particularly enjoys taking on projects that challenge them to think and create in new ways, especially when these projects involve collaboration with musicians or other artists.

Jasmine has had premiers at New Music on the Point (2016), Atlantic Music Festival (2016), and I/O Fest (2013, 2015, 2016, 2017). They have been premiered by OSSIA New Music; the Williams College Concert Choir, Student Symphony, and Baccalaureate Choir; and malai ensemble. Their first sound installation was premiered in Williams College’s Bernhard Music Center in 2014, with a second installation at I/O Fest in 2016.

In addition to their work as a composer, Jasmine is an experienced arts administrator. Jasmine is currently board operations manager for Thompson Street Opera Company, a Chicago-based organization which exclusively performs works by living composers. Jasmine has also been a chair of the Student Composers Committee (Northwestern University); co-director of the Graduate Composers Sinfonietta (Eastman School of Music); co-producer of “Music Matters,” a new-music radio show on WAYO FM (Rochester, NY); founder and director of malai ensemble (Williams College); and co-director of the Williams College Student Symphony.