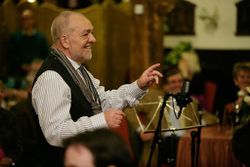 Jan Molenaar studied the piano with Wim Meyns and Ber Joosen, and he completed his education at the Royal Conservatory in The Hague. He also studied conducting and instrumentation with Gerard H. Boedijn and the organ with Cor Kee. At the age of 17 he was appointed conductor, at that time the youngest conductor in the Netherlands, to the Fanfare Band Eensgezindheid in Wormer, North Holland.

In 1958, he joined Molenaar's Muziekcentrale NV, a publishing firm specializing in wind band music. In 1962, he took over full responsibility for the complete publishing portfolio from his father Pieter Jan Molenaar until his death. The publishing firm, which was headed and run by Jan Molenaar and his brother Bob Molenaar, expanded to one of the largest music publishers in the world, specializing in wind band music. The company is represented in over 30 countries.

Apart from the business commitments, Jan Molenaar held several positions on the boards of the BUMA (Dutch music copyright bureau). He was president of the World Association for Symphonic Bands and Ensembles (WASBE) from 1987 to 1989 and was appointed honorary life member in 1991. In the musical field, he acted as guest conductor of, among others, the U.S. Air Force Band, Purdue University Band, G.U.S. Footwear Brass Band and the Banda Primitiva de Lliria (Spain), and it was with the latter orchestra that he was appointed honorary conductor. Jan Molenaar also conducted the VanderCook College Band in 1969 during the Midwest International Band and Orchestra Clinic.

He wrote a number of arrangements for symphonic wind band and fanfare band and conducted his own jazz orchestra, Jan Molenaar Big Band, from 1968 until his death.