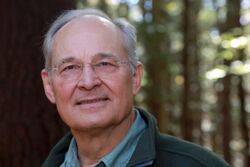 Jan Krzywicki (b. 1948, Philadelphia, Penn) is an American composer, conductor and educator.

Mr. Kryzwicki began the study of piano at an early age. He took composition lessons from Joseph Castaldo while still young, and then studied at the Juilliard School of Music with Vincent Persichetti and Elliott Carter. He took further studies at the Ecole de Beaux Arts in Fontainbleu, France, with Nadia Boulanger, and at the Aspen Music Center with Darius Milhaud. He eventually received a Bachelor of Music degree from the University of Kansas and a Master of Music degree from the Philadelphia Musical Academy.

Kryzwicki has taught at Beaver College, Haverford College, the Philadelphia Musical Academy, the Philadelphia College of Performing Arts, and the New School of Music. In 1987 he joined the music theory department at Temple University, where he continues [2022].

As a composer, Kryzwicki has written music for orchestra, wind ensemble, solo instruments, voice, and chorus, along with making arrangements of the classics. He has been commissioned by prestigious performers, and organizations such as the Philadelphia Chamber Music Society, the Mendelssohn Club of Philadelphia, the Chestnut Brass Company, Network for New Music, and performed across the United States by ensembles such as the Colorado Quartet, Network for New Music, Pennsylvania Ballet, Portland Symphony Orchestra, Alea III, and others.

His works have been heard at conferences of the College Music Society, the Society of Composers, and on national public radio. He has received awards from the American Academy of Arts and Letters, ASCAP, Meet the Composer, and a Pew Fellowship in the Arts. Krzywicki has been a resident at the Rockefeller Foundation (Bellagio, Italy), at the Bogliasco Foundation (Bogliasco, Italy), and has been a fellow at the MacDowell, Yaddo, Millay and Virginia Center for the Creative Arts colonies.

As a conductor, Kryzwicki has led performances of music from the middle ages to the present, including a large number of local and world premieres. He is conductor of the Philadelphia-based contemporary music ensemble Network for New Music, with which he has premiered over 70 works.