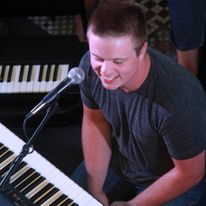 James (Jamie) Teachenor (b. 1980) is an American singer-songwriter, musician and producer.

Teachenor is the son of Rock-A-Billy Hall of Famer, Jim Teachenor. Jamie started very early in music, fronting many bands in the Southeastern and Midwestern United States. By the age of seventeen, he was receiving regular regional airplay, and the day before his 21st birthday, he moved to Nashville to further pursue his musical dreams.

In 2012, he released his debut album, The Departure. His sophomore project, Waiting Room, was released in 2013 and in 2014, he released "Lo-Fidelity" under the band name, Lo-Fi. His television appearances include ABC's Good Morning America and The CBS Early Show. His songs have been recorded by many major Country music artists.

Teachenor joined the Air Force and the Air Force Band in Colorado Springs. He created the basic melody and lyrics for Semper Supra, the official song of the United States Space Force, in 2022.