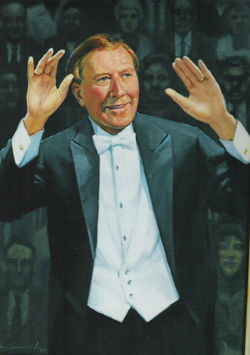 In his supervisory role at Tech he oversaw the entire band program. He also conducted the university's nationally-acclaimed Symphonic Band and directed the Texas Tech Band and Orchestra Camp, one of the largest youth music camps in the nation. Sudduth also taught arranging and conducting at both the graduate and undergraduate level. Sudduth's arrangements, transcriptions, and compositions, for both marching and concert band, numbered more than 300. Many of them were published.

Omicron Delta Kappa and Mortar Board honored Sudduth in 1982 for outstanding service to Texas Tech. The next year he participated in the National Intercollegiate Band. Phi Mu Alpha Sinfonia Fraternity of America awarded him the National Citation of Excellence in 1985 for outstanding contributions to music. Sudduth was guest conductor of the Lubbock Symphony Orchestra at Ballet Lubbock's performances of Tchaikovsky's Nutcracker from 1987 through 1993. In addition, he conducted the Lubbock Youth Symphony Orchestra in 1992 and led several of the Lubbock Symphony Orchestra's pops concerts. In October 1988 he became the first American to guest-conduct the Seoul Wind Ensemble in Seoul, South Korea. In May 1993 he conducted the Texas Tech University Symphonic Band at Carnegie Hall. In 1995 he received the Distinguished Service to Music Medal, the highest honor that can be bestowed by Kappa Kappa Psi / Tau Beta Sigma National Honorary Band Fraternity.